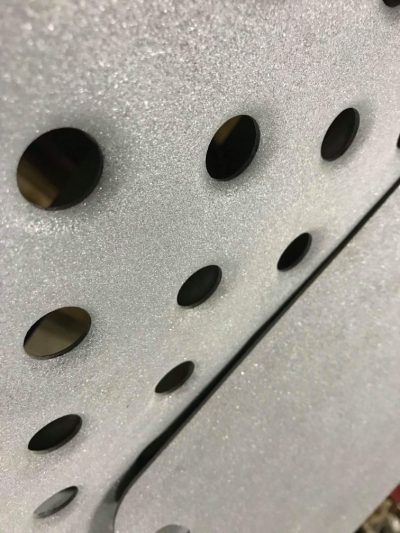 Written by isoadmin on November 5, 2019. Posted in Resources.

There are quite a few different grits available for sandblasting these days. There really isn’t one single best grit overall; each grit has a role and is better or worse for each type of job. However, some do stand out as particularly good media, and crushed glass is one of these. A somewhat newer entry in the field, it has nevertheless been used successfully for decades, and it offers a range of advantages over other grits, including garnet.

What Is Crushed Glass?

You know all those glass food and beverage bottles that get thrown away? They can be reused for a few purposes, saving money and reducing the impact on landfills. One of the key uses is for crushed glass sandblasting. In most cases, the glass particles will be from a variety of sources, and because it’s from discarded sources, it tends to be much cheaper.

As an engineered abrasive, it is mechanically broken into pieces of approximately the same diameter with enough variation to perform as an aggressive grit. Crushed glass can do most of what garnet can at a fraction of the price, but it also can fulfill needs that garnet can’t.

What Are the Benefits of Crushed Glass?

First off, the product is 100% recycled, meaning it’s not only better for the environment, it saves you significant money. The grit sizes range from coarse to extra fine, providing medium to high etch. It’s also entirely non-toxic, so it can be used in environmentally sensitive areas and near bodies of water, which is why the U.S. Navy prefers it.

While it’s true that glass contains silica, when it’s used as an abrasive media it’s considered entirely silica-free. As an amorphous solid, glass has an unusual chemical structure in a closed crystalline arrangement. This makes it impossible to adhere to human or animal lung cells, so silicosis is not a threat at all from either crushed or bead glass. Australia’s Workplace Health and Safety laws classify glass grit as only a nuisance dust, equivalent to any other non-toxic dust.

WHS also found no heavy metals in residue, so you can use it without fear of human contamination. It also can leave less residue than other methods, and since it’s non-reusable and inexpensive, you can use it outside a cabinet without worrying about the cost.

The angular nature of the particles means that it’s highly versatile and can be used in place of garnet and silica sand in most applications and aluminium oxide for all but the most demanding stripping. It creates far less embedment than harder grits and tends to leave a natural, smooth surface. It’s also lighter than most other media, meaning that up to 50% less material will do the same job.

What Are the Best Uses for Crushed Glass?

Crushed glass sandblasting can be used in both dry and slurry applications. It’s often used for stripping bridges and in marine use, since it won’t harm water or animals who live around it. It strips rust quickly on both metal and fiberglass ship hulls and is also recommended for auto-body restoration, concrete stripping and most surface preparations. It can be used as a finishing polish on metal surfaces as well.

Many professional sandblasting companies are using it for residential remodeling, since it is perfectly suited for wood surface prep, including log homes. It’s also good for rapidly removing surface and deep corrosion on all but the softest materials.

If you are blasting outside a cabinet, crushed glass abrasive grit may be your best choice. Between the price and versatility, it’s hard to beat it. A natural tendency to avoid embedment and no risk of reacting with metals furthers the advantages. Add in the non-toxic nature and fast-acting angular grit and you have a nearly perfect broad-spectrum media. It’s a less expensive choice when bought in bulk, and it’s becoming one of the most popular abrasive blasting grits on the market today.

Jackie warned you it was coming!

If you haven’t got your listing sorted, now is the time to get your details listed. The blaster directory gives you the ability to advertise your services and products as well as display pictures of your capabilities and previous work achievements.

Just another way Jackie at Abrasive Media Supplies is working with you to ensure your success.

The blaster directory gives you the ability to advertise your services and products as well as display pictures of your capabilities and previous work achievements.